Our vision is to build the Austin Convention Center of tomorrow, to be a catalyst project in the development of the Palm District downtown, and to continue to be an economic driver in the city of Austin.

On Sept. 17, 2020, the Austin City Council approved the City to move forward with the negotiation and execution of an Exclusive Negotiating Agreement (ENA) with the landowners and developers of the two blocks just west of the convention center. The ENA will allow the City of Austin, landowners, and developers to establish more detailed specifications about pricing, acquisition, and development of an estimated 750,000 square feet of a westward convention center expansion space and associated amenities.

This approval follows the direction from Council as laid out in the Palm District Resolution (Resolution Number 20190523-029).

The next step is to bring forth for council consideration a Purchase and Sales Agreement and to begin construction on the western expansion of the convention center, the first phase of a three-phase expansion project will double the amount of available rentable space while modernizing the facility.

Our vision is to build upon the strengths that make Austin extremely attractive as a place to meet and convene. The approval allows us to move forward to negotiate for the convention center of tomorrow. 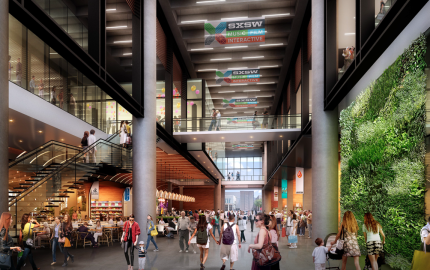